On the Occasion of our World-Congress [1929]

Over the past few weeks, we’ve blogged about the founding of the Neshei Agudath Israel. We’ve translated coverage of the event from the Bais Yaakov Journal and from Der Israelit. This week, we present Sarah Schenirer’s own words, taken from her Gezamelte Schriften [Collected Writings] (pages 38-43 in this edition) and translated here by Naomi Seidman.

The Eve of the Congress . . . And so the Orthodox woman has awakened from her long, lethargic sleep and has begun to organize. From day to day her work for society intensifies, with pride she carries our Torah banner of old, around which all the women of Israel will congregate.

This month all the delegates chosen by religious Jewish women will gather in Vienna to create a world organization of Orthodox Jewish women. It has not been long since we first established the Bnos organization in Poland, and already from the dais of the World Congress the powerful voice of the religious Jewish woman rings out on the world stage. She is no longer isolated either in her thoughts or aspirations, the daughter of Israel who knows the Jewish sources. In every corner of the world she has close and intimate sisters in spirit.

I know full well that many of our pious Jews will look at us with scepticism. We hold sacred the ideal of women’s modesty. ‘She is in the tent’ [Gen. 18: 9] and ‘all the glory of a princess is within’ [Ps. 45: 14]! No doubt a portion of the community will regard our congress with suspicion and fear and see it as a deviation – God forbid – from Israel of old.

But these same pious Jews should know that this conference of Orthodox women is a necessary response to the dangers that prey on our sisters from various secularist directions. Et la’asot lahashem, ‘It is time to act for the Lord’ – from this perspective must our public efforts be understood.

We have recently been hearing about other women’s congresses, which present themselves as if they were the sole representatives of the masses of Jewish women and put forth various resolutions that stand in absolute contradiction to the ideals and aspirations of religious women. Even though no one has appointed them to do so, they take upon themselves the right to proclaim various slogans against the spirit of our Torah and launch false accusations against our Torah sages. Just recently we heard of a women’s congress where certain things were said and written about the agunah question and about women’s suffrage that we Orthodox women would never have dreamed of saying – although we know the meaning of ‘women’s rights’ perfectly well, and no one feels more deeply than we do the plight of the unfortunate agunah. But we also know that the Torah and Jewish law are supreme. And that is why we religious women, just like religious men, submit to the Torah and Jewish law, which always works for our benefit and happiness.

Our congress is necessary right now for just these reasons. From our speakers’ podium it must boldly be proclaimed that all those other women have no right to speak in the name of the religious Jewish woman. The aims, approaches, and ideals of the great masses of religious Jewish women must be made clear before the whole world. The Jewish world must know that thousands and tens of thousands of Jewish women all over the globe cling to the Jewish religion and wish to continue to spin the golden thread of Jewish tradition.

But that does not mean that we do not have many problems requiring internal resolution. Family purity, luxury and fashion, the education of our children, and so on. The weightiest issue we are facing now is how to combat the public school system, which increasingly threatens the Jewish family.

Our task must also be to find ways and means to fight for the protection of the Jewish daughter and her moral improvement.

It will be a great day when we come together to collectively consider how to improve Jewish family life and return the sanctity to Jacob’s tent.

It will also be a great sanctification of God’s name before the eyes of the world that our congress is taking place at the same time as the second World Congress of Agudath Israel. The honor and esteem of Orthodox Jews will be strengthened when, at the same moment as the sons of Israel declare in ringing tones their faithfulness to the God of Israel, the daughters of Israel proclaim to Orthodox Jewry: ‘We are with you!’

During the great days of the month of Elul this year, we will fulfil ‘We will go with our sons and our daughters, for we must observe the Lord’s festival’ [Exod. 10: 9], and this will be remembered for generations as the great holiday of the revival of the entire Jewish people! 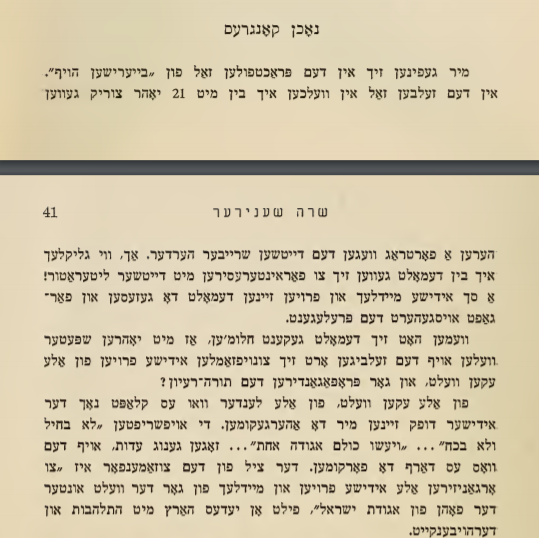 We find ourselves in the splendid hall of the Bayerischer Hof, the same hall in which twenty-one years ago a conference in honour of the German writer Herder was held. Oh, how happy it made me in those days to take an interest in German literature! Many Jewish girls and women sat in this room then, gazing in rapture at the lecturers.

Who could have dreamt in those days that all these years later Jewish women from every corner of the globe would gather in this very room to spread the ideal of Torah?

From every corner of the world, from every country in which a Jewish heart beats we have gathered. The writing on the banners, ‘Not by might, nor by power’ [Zech. 4: 6] and ‘May all unite in a single fellowship (agudah ahat) bear witness to what is transpiring here. The aim of this gathering, ‘to organize the Jewish girls and women of the world under the banner of Agudath Israel’, fills every heart with passion and exaltation.

Mrs. Goldschmidt, the daughter of Dr Löwenstein from Zurich, calls on Jewish women to work together, to unite on behalf of the Torah and yiddishkeit. Her voice resounds powerfully, the voice of an authentically Jewish feminine heart, which penetrates deeply into the soul.

Soulful and moving are the words of the Gerer Rebbe’s wife. ‘All beginnings are difficult’, but as hard it is, a beginning must be made! The gathered women listen with bated breath to her emotional speech, which moves them to tears . . .

One after another the women ascend to the dais, delegates from the United States, England, Germany, Austria, Belgium, the Netherlands, Czechoslovakia, and elsewhere. Every speech is well considered, and each boils down to the same thing: let us unite, organize ourselves in order to help the suffering people of Israel! Let us devote our physical and spiritual energies to soothing and healing Jewish suffering! Let us help build the House of Israel!

We find ourselves in an intimate circle in Mrs Bondi’s home when suddenly the question of wigs comes up. One of the delegates, a very intelligent woman and a teacher in the Riga girls’ high school, found herself in an uncomfortable position when the resolution was put forward that all [married] women who wish to belong to the Women’s Union of Agudath Israel must wear wigs. She acknowledges and confesses that she doesn’t cover her hair because none of the young [married] women in her city wear a wig. She is surprised, however, when the delegates from Germany report that all the young religious women in Germany wear wigs, ‘even the most educated ones, with advanced degrees’. The delegate from Riga decides on the spot to start wearing a wig, and also to try to persuade all her female acquaintances to do likewise.

There is so, so much we got from the first international Women’s Congress. Unfortunately, many of our Bnos leaders in Poland were unable to participate in this extraordinarily interesting gathering. But have no doubt, dear spiritual sisters. You were fondly remembered and everyone there was very pleased to hear about your work! Let us devote ourselves to it with renewed energy and sacrifice, since we are now, praise God, already an international organization!