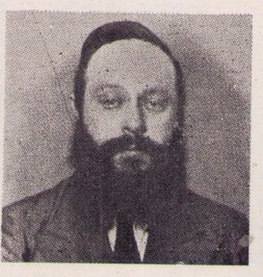 Rabbi Alexander Zusia (Zyshe) Friedman (1897-1943) was Secretary-General of the Agudath Israel in Poland beginning in 1925, and Director of the Warsaw Office of the Bais Yaakov schools and the Warsaw Bais Yaakov Teachers Seminary.

Rabbi Zyshe Friedman initiated, led, and/or participated in almost all the diverse activities of the Polish Agudah:

the youth movement for boys, Tze’irei Agudath Israel (which he founded);

the workers’ movement, Po’alei Agudath Israel (which he co-founded and developed the ideological agenda with Yehudah Leib Orlean and others);

During the Holocaust, Rabbi Zyshe Friedman organized underground Bais Yaakov (and other Orthodox) schools in the Warsaw Ghetto, which in 1941 were allowed to operate openly.

In February 1942, the Judenrat leader Adam Czerniakow, who admired Rabbi Friedman, appointed him to lead an independent committee for religious affairs in the ghetto. (For more, see: Hillel Seidman, Ishim she-hikarti [Personalities I Knew], Jerusalem, 1970, 77-89.)