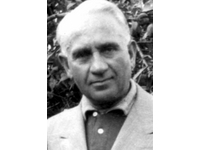 Eliezer (Layzer) Schindler (1892-1957) was one of the preeminent Orthodox Yiddish poets of interwar Europe. Born in Tyczyn, Poland, he lived in the Soviet Union before moving with his wife, Sali, to Munich, Germany, in the early 1920s. In 1938 he emigrated to America and became a farmer near Lakewood, New Jersey. Greatly influenced by Nathan Birnbaum, he was an active supporter of and writer for the Olim [the “Ascenders”], the movement Birnbaum founded to revive Orthodoxy through communities of young Jews living “simple,” communal lives in rural and agricultural settings, devoted to traditional Jewish learning, language, art, music, and mystical piety and apart from the “pagan” and materialistic elements of modern urban  life. Schindler’s poetry and essays, full of religious yearning, were particularly popular in the Bais Yaakov movement and his writings appeared often in the Bais Yaakov Journal. He wrote the lyrics to the Bais Yaakov school song (the music was composed by Joshua Weisser) and anthems for Bnos, Olim, Pirchei Agudath Israel, and Tse’irei Agudath Israel. He also wrote a number of textbooks for Bais Yaakov. His son, Alexander M. Schindler (1925-2000), was a leading figure of American Reform Judaism.